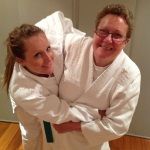 63-year-old mother, Janet Lambert is suiting up for her sixth Australian Masters Games in Geelong next week. But this time she is bringing her daughter, Rebecca Howl, along for the ride.

Lambert from Endeavour Hills, has been training, competing and coaching in judo for over 50 years, including travelling to Brazil, Canada and Japan to perform at an elite level.

"I first went to a judo club with my brother and was instantly fascinated by the sport. I have been lucky enough to travel the world thanks to my passion for judo." Lambert says.

And how does she keep motivated?

"It’s because of the ongoing challenges. I found that it’s a sport where I continually learn so I’ve never lost interest.

I also constantly meet new people and have made many lifelong friends, and it is a sport that has allowed me to involve my children."

But this will be the first time that Lambert has competed with her daughter, Rebecca Howl.

"It’s very exciting." Lambert said. "We have talked about competing together for years, and now Rebecca is old enough to compete in the Masters. We are able to carry out our dream."

Howl, now residing in Chelsea, began training when she was six years old and competed until she was 16 when she stopped to pursue other sports. Whilst not competing she remained involved in judo by volunteering at events.

"I’m just excited to have the honour of competing with my mum. She’s a true champion of the sport, one of the highest ranking female judo players in Australia. That’s something really special and a story that will be passed down the generations." Howl said.

During the Games, there are two different styles of judo being performed. The first is shiai judo, a highly physical type that involves fighting against opponents. Lambert and Howl will be competing in the kata discipline.

It involves a prearranged form of techniques demonstrated with a partner. There are five katas (techniques) in the games all with elements of attack and defense. Some katas involves weapons and some without. Five judges score each technique out of ten.

To prepare for the Games the duo has been training twice a week for the past six months. Focusing on the techniques of their particular kata. Lambert also coaches judo twice a week at the Endeavour Hills Judo Club.

Lambert and Howl will be competing in the kata Saturday 5 October at the Katsumata Centre at Kardinia International College. The shiai will be held the day after at the same venue.

Lambert and Howell will be joined by Channel Seven television personality Mark Beretta, best known for his role on the popular morning program Sunrise. Beretta, a 10-time Australian national waterskiing champion and avid road cyclist will swap the bike for a dragon boat when he lines up in the Australian Masters Games.

Born and raised in Geelong, Beretta said he was delighted to take part in the event.

"I’m excited to return to my home town with my family and showcase Geelong to the rest of Australia. It will be an exciting week of sport and entertainment, and dragon boat is going to be something foreign to me but I’m looking forward to the challenge," Beretta said.

"I have always participated in sport and the Australian Masters Games is another great way for people to stay active in a fun atmosphere."

Kean Selway, chair of the 14th Australian Masters Games, said the aim of the event was to invite participants from all parts of Australia and the world to gather in a celebration of sport, health and wellbeing.

"As one of Australia’s premier mass participation multi-sport event, our participants come from all walks of life and from all over Australia.

Being able to host such an iconic event in Geelong is massive for the local community and surrounding areas." Selway said.

For further Australian Masters Games information and to register visit

Plan the trip of a lifetime with All Sports Travel

To help deliver the trip of a lifetime, is Australian owned and operated boutique travel company, All Sports Travel, appointed as the official travel partner for the 2021 Australian Masters Games.

Countdown until the Games begin